Awesome! Mindy went to the vet to get her nails trimmed and she is down to 13.2 lbs. She’s lean and mean!

She didn’t like being at the vet at all today. I made the mistake of bringing both lexi and her last time and it was chaotic! I think I ruined her for good!

First Snow of the Season

Lexi was still very young when she experienced snow last season, so I am not sure if she remembers it. Plus she was sick for so many months, that I don’t think she got outside for too long.

Last night, the first snow of this season fell.

Lexi was out in the yard for a little bit last night, while it was first snowing, but she stayed by the door/porch where it was drier. There was about 4 inches on the ground when we took the dogs outside this morning. Lexi went out into the yard cautiously, but she seemed okay.

I saw her pee, and while I was taking some photos, I thought I might have saw her poop, but I am not 100% sure.

By the end, I think her feet were very cold, and she just wanted in the house! I tried to keep her outside for a little bit, to make sure she didn’t need to poop, but she just wanted to go inside. Just as suspected, Lexi is not a cold weather doggy! hehee.

Mindy doesn’t mind the snow, but she hates when there’s freezing cold ice under her paws. Last night, Mike said that while Mindy was outside, she went crazy running around playing in the snow (on leash). She likes when she can kick up the flakes! I tried to get her to run around this morning, but she wasn’t in the mood I guess. 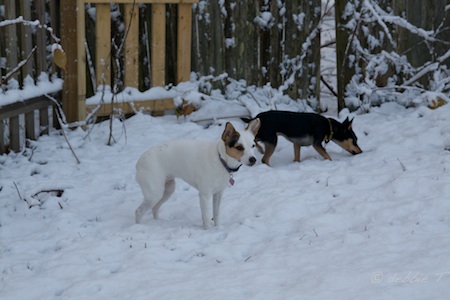 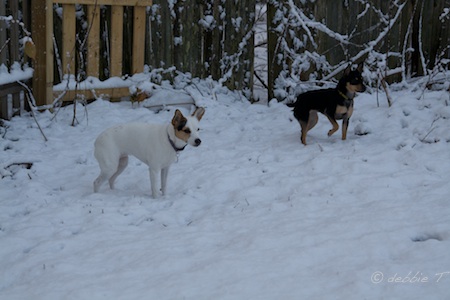 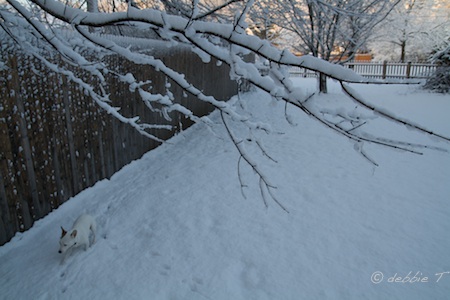 Outside today, Lexi peed then was sitting at the pine tree by the door. I noticed her and it looked like she was pooing or peeing again. Her leg was kind of “up”.

Then I realized that she was sitting down and her right leg was hurt. I immediately picked her up and held her for a bit. When I put her down she seemed to be alright. She was running around chasing her ball just like usual.

I don’t know what was up but I hope it was just a one time thing and not a problem like with Mindy.

We started a new ritual every morning. Right after we do bizness outside, Lexi is asked to “stay” at the bottom of the stairs, while I run upstairs to hide somewhere.

My favorite place to hide is right at the top of the stairs behind a GLASS door in our living area. I call to her “Come find mama” and she races up the stairs, and down the hallway away from me. It’s a riot! She can’t see me through the door, EVER! It’s really a wonderful hiding spot, because I can see her and her reactions perfectly.

Eventually, she will see me behind the door, when she’s searching through the living area. It’s so cute. Both Mindy and Lexi love “Hide and Seek” – we play with food kibble too!

Mindy loves to sit on my lap when I am working on the computer every morning. She will even sometimes fall asleep! It’s a nice time to bond with her.

Since Lexi has been doing very well with her house training, I have been leaving her out of her crate in the morning, and she usually finds an old bone to chew on, but she usually hangs out in my office. Sometimes, she begs to sit on my lap too. She loves to watch the laptop screen, the cursor moving or the colors moving around. It’s so cute to watch her fascination with the screen!

But since she is still young and energetic, she only stays on my lap for a short while, before she wants off!

I decided to give Mindy a turn, and petted Lexi while she sat on the floor. Well, that wasn’t good enough for her, she leaped up and landed on my lap on top of Mindy! aaacch! It was so funny. I had two small dogs battling it out on my lap!

I scrambled to try to launch “Photobooth” so I could take a photo of the situation! And here is one of the better shots! It was hard to keep them still in front of the camera! 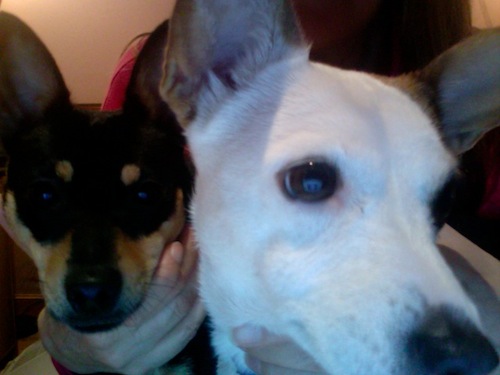 And here are a couple of outtakes: 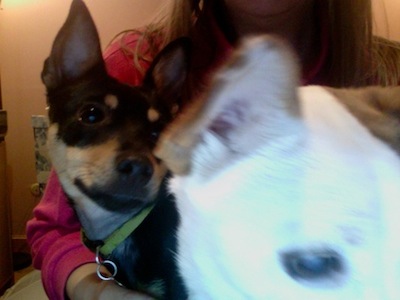 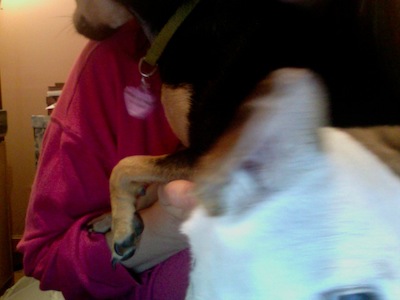 One Mindy Extreme to Another

The other morning, I took Mindy outside, so I could snap a few photos of the rain drops in the yard. We started out calm and relaxing. She loves when I bring her outside with my camera. 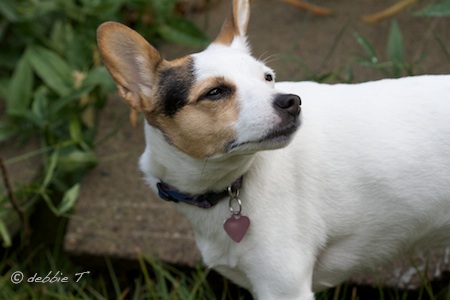 Then, she caught a burst of energy. I love how she gets like this, running non stop like the wind. All four paws are airborne! 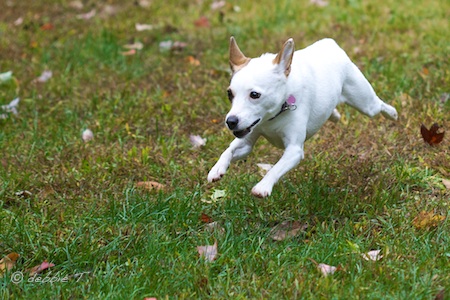 She would race, then run over to the side, and dig like crazy in the dirt. 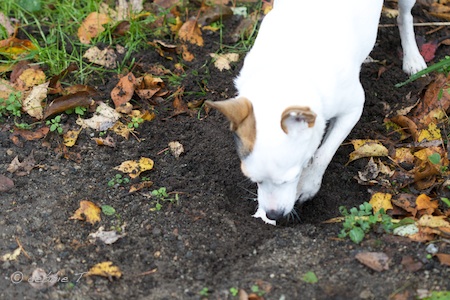 Then take off again running! She even got a little leaf on her paw! 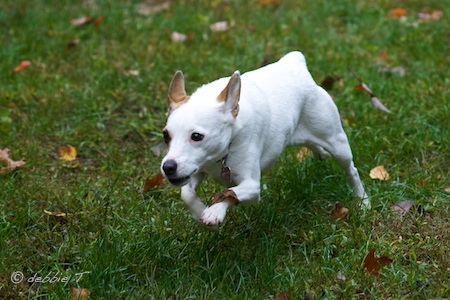 It was so funny to watch, and I can’t even say how exciting it is to see her happy, healthy and active like this. I know her legs hurt sometimes, but when I see her run, it’s amazing. She is trim, fit and full of life!

So, when we got back into the house, her feet were filthy from the mud, I had to throw her in the sink for a quick foot bath! 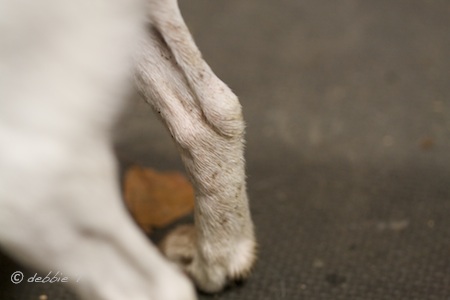 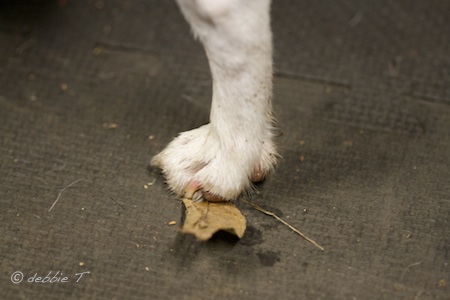 We counted and rolled a ton of coins a couple of weeks ago, and some must have fallen on the floor.

Lexi will walk up to us and spit out a penny, like out of nowhere. (I don’t know how she finds these things, but she loves to find things, chomp them, then spit them out.)

She’s a walking ATM! I wish we could somehow get her to spit out dollars instead!

Lexi is Growing up and Maturing!

Our little Lexi is going to be one year old later this month and she is getting more and more settled and mature. Yes, it’s fun to have a puppy, but she is a wild one with a mind of her own! ha! Aren’t all terriers like that?

After breakfast, I usually put her in her crate for her nap, but yesterday morning, she was content to be chomping on her bone lying next to me on the sofa downstairs.

Eventually, I moved both Lexi and Mindy upstairs to the bedroom, and we all napped together in bed! It was a nice relaxing Sunday! She was snuggled on my arm under the covers, happy to be next to me! I was happy she was happy!

A much happier video that I neglected to post. My girls playing in the yard. I love this one, as Lexi has a piece of grass stuck in her mouth and she has the cutest sweetest face.

I had to stop watching this. What an ass. And then I can’t believe Nat Geo puts the clip online to promote the show. If that clip isn’t enough to make you NOT want to watch him, I don’t know what will! I am amazed that he is still on TV, especially on the same network as Dog Town. ugh. Cesar Milan is such a jerk!

And the bigger issue is clips like this are out there, being promoted. Newbie dog owners think this is how to train a dog! His mindless followers keep watching him and treating their dogs like crap!